Billions of seedlings germinate and disappear every year – but they may be as important for forest dynamics as majestic adult trees.

Walk down a wild forest in spring (or during the rainy season, if you are walking down a tropical forest). You’ll walk on a carpet of tree seedlings, growing from the seeds dispersed by the trees in the canopy above your head.

It is a spectacular view, that gives you the feeling of how powerful forest dynamics are. It is also amazing to see all those tiny cubs, sitting at the feet of their enormous mothers.

But there is also a tragic side to this. Look better: there are much fewer saplings, even fewer sub-adults. No matter the tree species, most of those youngsters will die soon and suddenly, in a massacre that makes WWI trench warfare pale in comparison. The pyramid of ages is very steep.

What does this slaughter tell us about how forest ecosystems work? Jean-Pierre Pascal (‘JPP’), a brilliant and witty, now retired, CNRS (France) forest ecologist, used to say that it was useless to study all those naturally regenerating seedlings, which will basically all die.

And he was right: from the forest manager’s point of view, interesting things start when trees reach ’10 cm d.b.h.’ (for the outsider: ‘d.b.h.’ is ‘diameter at breast height’, that is, at 130 cm from the ground (for a short guy like me)). And it is so exactly because only few (wild) stems reach that size, hence it is pointless to take care of all those which don’t.

A tree can live and be fertile for several decades or even a few centuries. Every year or every few years, a dominant tree produces hundreds or thousands of seeds. If one imagines a ‘stable’ forest stand, one that does not expand or retreat (a very unlikely case indeed*), then each tree will be replaced by one tree over the course of its life. In other terms: of all those hundreds of thousands of seeds produced by one tree, how many, on average, will be left after a tree generation? ONE.
This is plainly insane. You can call it an extreme r strategy – if you like understatements. 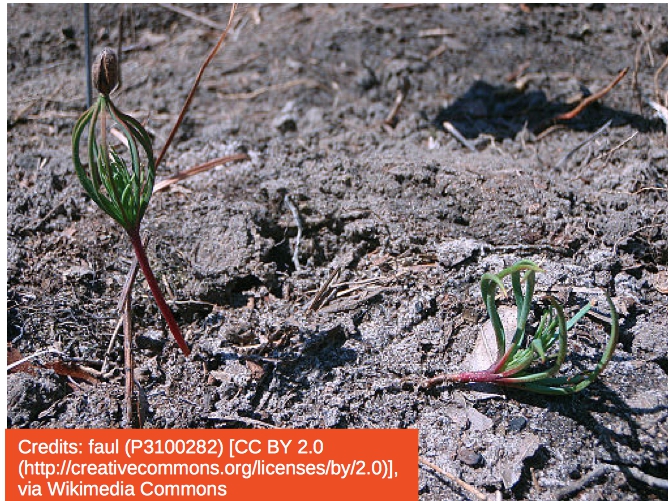 What may be going on there, from the population-genetic point of view? Seedlings die for a variety of reasons: they may be damaged by herbivores, they may find it hard to tap into soil resources, undergo competition from other seedlings, be attacked by fungi – the list of good reasons for a seedling to die is endless. If all this is purely random, then well, there is not much work to do for the evolutionary geneticist. But those populations are large, and we know that selection for survival can be particularly effective in large populations. So yes, selection can happen there, and the seedling may even be the essential developmental stage at which that kind of selection happens.

In an elegant modelling exercise, Oddou-Muratorio and Davi have shown that, actually, selection for survival occurs at young stages, while older cohorts undergo principally fertility selection (logically: almost nobody is left, so almost nobody can die). In the case of the beautifully named tropical tree Symphonia globulifera, we have found (the article is in preparation) that, in controlled experiments involving reciprocal transplants between habitats, ecotype differences in growth, germination and survival can be identified at ages 1-5 years. The TIPTREE project is seeking signatures of selection on short timescales (within one generation) in seedlings, while the GENTREE project is establishing a monster-size seedling survival experiment with two trees, Scots pine and silver birch. In a very elegant experiment, Antonie Kremer (INRA – BIOGECO) is using diachronic approaches to study seedling adaptation. In a classic of tree population genetics, Alistair Jump et al. have shown that allele frequencies of current adults have been influenced by climate at establishment time.

For decades, forest science has looked at properties of seedlings and saplings mostly hoping that they could help predict characters in adults. This is a much needed strategy if one wants to make forest management choices in production systems. On the contrary, the study of seedling properties in themselves may be the key for the management of wild forests under climate change. Stay tuned for more information about this, surprises may come soon.

* no, there are no ‘stable’ forest stands. Forests themselves keep expanding and contracting, even in the absence of human intervention, and within forests, populations can undergo their own cycles of expansion and contraction, over long time spans.

3 thoughts on “Where the lost seedlings go”

Ivan Scotti is a Director of Research at INRA URFM, Avignon, France.